Skip to content
Here are the photos of me with Andrew Breitbart from this summer. I had a twitter fight with Mr. Breitbart today, which reminded me I needed to post this!
On the first night of the Netroots Nation convention, As I walked back to my hotel in Minneapolis with my lefty all female entourage (Wendy Cohen, Negin Farsad, Amanda Marcotte), my all “right wing all male entourage”-dar went off and I noticed an inebriated Andrew Breitbart, stumbling the streets, with a Weiner resignation to celebrate. “Mr. Breitbart? Can I get a picture with you?” I asked, in an involuntary reflexive way, as if Breitbart had run into my knee with that thing they test your reflexes with at the doctor, and not almost run into me with his heft. “Out of love or irony?” he asked. Before I could respond, which I didn’t, he was by my side.

He reaches out to me but I deny him.

I reach out to him, but he is cautious, having been burned once, and recalling, I imagine, the wise words of George Bush: Fool me once, shame on — shame on you. Fool me — you can’t get fooled again. 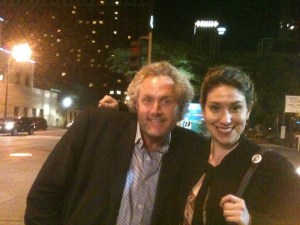 We are clearly excited. Look at our eyes. They are about to pop out of our skulls. He leans in with even more enthusiasm than before.
I would have loved to have bro-d down with him on how much the Democrats suck for walking into his trap and throwing Weiner under the bus. And I am convinced that he was perhaps one shot away from providing us with his own crotch shot. But one of his entourage  recognized Amanda Marcotte (thanks for being a rock star Amanda! Gawd!) and I got scared. I was also in shock.