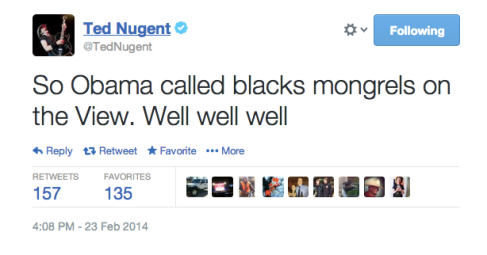 So, it only took statutory rapist, self-defecating, draft dodger Ted Nugent a month to find the quote he thinks vindicates him for having called his president a subhuman mongrel. Drumroll please…. “So Obama called blacks mongrels on the View. Well well well” tweeted a comma-shy Nugent. So, what’s the deal? Did President Obama indeed call “blacks” mongrels? Well, it turns out he did, indeed, say, “We are sort of a mongrel people…. I mean we’re all kinds of mixed up.” So, now the question becomes, did Obama call “blacks” mongrels? Yes and no. He was referring to African Americans initially, but Obama explicitly said the same applied to white people: “That’s actually true of white people as well, but we just know more about it.” But let’s, for argument’s sake, say Obama had really been speaking exclusively about Black people. Would that legitimize Ted Nugent’s use of the word. Not at all. First of all, there is the whole question of the identity of the speaker. But I’m not going to focus on this because I’m sure anyone dense or dishonest enough to think this is a gotcha moment for Obama is incapable of or unwilling to recognize the difference between a Black person using the N word, and a non-Black person using it; the difference between a gay man using the f word and a straight person using it etc.

What is undeniable and not up for debate is the fact that Obama and Nugent meant profoundly different things when they used the mongrel. Ted Nugent is a proud Obama-hater, who vowed that he would be dead or in jail if Obama won re-election. (I thought you were a man of your word, Ted.) When he called Obama “mongrel” he was being overtly and unmistakably critical (for argument’s sake, I’ll use the word “critical” as opposed to hateful, racist, derogatory, offensive etc). How do we know? Well, besides his record of Obama-victory-based death or prison threats (or teases, to me), the immediate context of the quote makes Nugent’s perspective crystal clear: “I have obviously failed to galvanize and prod, if not shame enough Americans to be ever vigilant not to let a Chicago communist raised communist educated communist nurtured subhuman mongrel like the ACORN community organizer gangster Barack Hussein Obama to weasel his way into the top office of authority in the United States of America.” So, he’s lamenting that Obama has not be voted out (or worse), calling him a gangster and, here’s the big kicker, subhuman. There’s an unspoken rule which governs the world that says that any word directly preceded by “subhuman” is not being used in a nice way. Now, compare this to Barack Obama’s use of the word. The only way for Obama’s use of the word to be at all comparable, would be if Obama had openly stated his opposition to African Americans previously or at the same point. If he had lamented being unable to galvanize people against African Americans and kick them out of the country. This is even more far fetched when we take into account that Obama was talking about white people, too. Now, for Nugent to have any leg to stand on, Obama would have had to have expressed a hatred of black people and white people and actually all people, since almost all people are mixes. Please note, Obama does not use the word “subhuman” or any other Hitlerian nomenclature in his appearance on the View. So there’s that, too.